In November, Deepak Chahar picked up a hat-trick and finished with figures of 6 for 7 to lead India to victory in the third T20I against Bangladesh at Nagpur and also wrap-up the series in India’s favour, 2-1.

With that spell, Chahar became only the third bowler to pick up six wickets in men’s T20Is. Those bowling figures, in fact, are the best ever in men’s T20 internationals! 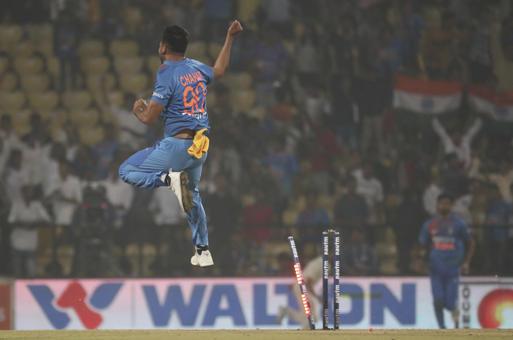 Having dismissed Shafiul Islam with the last ball of the 18th over, Deepak Chahar had Mustafizur Rahman caught off the first ball of the 20th over. He then cleaned up Aminul Islam (above) with a perfect yorker to become the first Indian male to take a T20 international hat-trick and only the second Indian, after Ekta Bisht, to achieve the feat. The hat-trick finish meant that Chahar had figures of 6 for 7 in the match.

Here’s a look at the three bowlers who have taken six wickets in a T20I innings: (click to expand)