In the heart of the jungle

Did you know that more than 20% of the Earth’s oxygen is produced from the Amazon rainforest? That is why it is also referred to as the ‘lungs of the Earth’. It is the world’s largest tropical rainforest covering over 5.5 million square kilometres, it is so big that the U.K. and Ireland would fit into it 17 times! The Amazon has around 40,000 plant species, 1,300 bird species, 3,000 types of fish, 430 mammals and 2.5 million different insects. Isn’t that something? With the rainforest being a big part of the Earth and the environment, it is also up to us to help protect it and all it inhabitants.

The Amazon is found in South America and most of it is in Brazil, spanning Bolivia, Peru, Ecuador, Colombia, Guyana, Venezuela, Suriname and French Guiana. Let’s take a closer look at all the amazing things the Amazon has to offer: 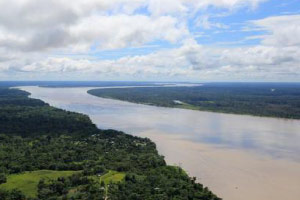 Running through the rainforest is the Amazon River — a network of hundreds of waterways that stretches over 6,800 km. It is also the world’s second longest river after the River Nile.

The Amazon is the home to several interesting (and deadly) creatures, including electric eels, flesh eating piranhas, poison dart frogs, jaguars and some venomous snakes.

Pirarucus are one of the most fascinating fish found in the Amazon. They easily eat up other fish and can grow to nearly 3m long. What makes them deadly is that they have teeth on the roof of its mouth and on its tongue!

The exceptionally skilled at hunting Harpy eagle or the macaw with its vibrant plumage are some of the exotic birds that can be spotted in the rainforest.

The golden lion tamarin, a one-of-a kind yet peculiar looking monkey and the largest living rodent, the capybara, are also hosted by the Amazon.

The canopy (the top branches and leaves of the trees) in the rainforest are so thick that when it rains, it takes about 10 minutes for the raindrops to reach the ground.

Recently, thousands of fiery infernos raged across the Amazon rainforest destroying the vegetation and the homes of animals. The fire had been burning for over three weeks till the world finally took notice. But the fire continues to rage. The Amazon is a vital carbon store that slows down the pace of global warming.

In the spotlight… Madras Day